A 2022 Headline: The molecular animation field revolutionises biological educational resources. A*s and 1sts for everyone!

This will probably not be the headline of any newspaper in 2022. However, we do hope that new biological educational resources are created that better reflect the imagination and capabilities of our generation. Most educational resources, from A-level through to degree level and beyond, use static 2D images to explain highly dynamic processes that take place in 4D. While unravelling 2D figures is an essential part of the learning process to grasp complex processes in a practical manner, alone, they are not the most effective teaching method.

When teaching cellular and molecular biology, educators often struggle when using 2D tools to teach and explain 4D processes. Research has demonstrated that visualising processes in 3D makes learning more efficient, and animations are valuable visualisation tools for novice learners and stimulate long-term memory retention [1]. An in-class research experiment showed that the retention of content was significantly improved when students were given a lecture that included animations, followed by the animation being used as an individual study activity [1]. The most useful visualisations expose the complexity of the components within processes, illustrate how and where they interact, provide a spatial representation of all molecules involved, as well as clearly illustrate the transitional states of components throughout the process [1].

A great example of an exciting project geared to better educational resources includes the publication of a series of biology e-textbooks, called “Life on Earth”, a project lead by the Biologist E.O. Wilson. The textbook series aims to “instruct and inspire high-school students, the future stewards of Earth, and to give them a deep understanding of all of the central topics of introductory biology” says E.O. Wilson [2]. For snapshots of the pages in these textbooks, see Figure 1. The textbook series integrates complex visualisations as part of the core curriculum and can be downloaded for free on iBooks. 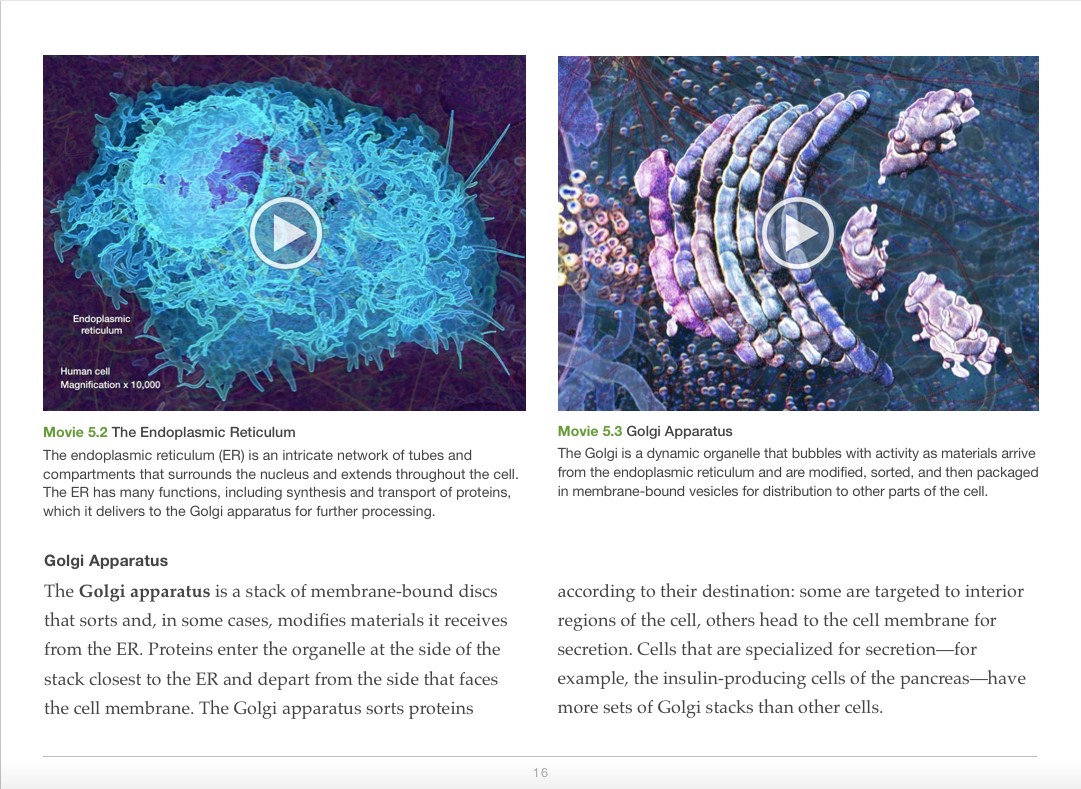 As well as holding the potential to revolutionise the way biology is taught, molecular animations’ benefits go beyond education, too. This niche and rapidly growing field have produced novel roles for scientist-animators. Molecular animators have the understanding both of a scientist that has studied complex molecular processes, as well as having mastered the technical animation tools of the film industry. There are few courses tailored specifically to prepare people for this role, so the molecular animators that are present today have all paved a unique path to this fascinating career [3].

Janet Iwasa is a renowned academic molecular animator. Starting her career as a cell biologist she never expected to go down this career path but is now working in the Department of Biochemistry at the University of Utah in the Animation Lab, which she founded. The Animation Lab works with biologists and other researchers to explore ideas and hypotheses through illustrations and animations [4]. Before this, while a student at the University of California, San Francisco, Iwasa spent much of her time making animations with her colleagues in the lab for research presentations. Throughout several projects there, creating animations often gave rise to new ideas for her team, and revealed insights that would have been difficult to gain by any other means [3]. No other software in the lab allowed manipulation and viewing of multiple proteins so freely, and this freedom gave the team the ability to envision new possibilities and see the shortcomings of their mental models for how the biology worked [3]. A new line of experimentation was even developed directly by questions that arose during an animation project. It was these projects that led Iwasa to understand that “an animation is a powerful tool not only for communicating an idea but also for exploring a research hypothesis” [3].

An ongoing project of Iwasa’s is ‘the Molecular Flipbook’, a 2-year long project to develop an open-source, free, and user-friendly 3D animation toolkit funded by the US National Science Foundation. An image of the interface can be found in Figure 2. The motivation for this project came from the laborious learning process involved in gaining the technical skills to create animations and Iwasa’s belief that everyone should be able to animate models of their molecular complexes, moving in 3D space [4]. There was a demand from researchers for a more intuitive software to produce animations [3]. The Molecular Flipbook aimed to create a software that allowed a biologist who had never used it before, to be able to create their first molecular animation that matched their hypothesis in just 15 minutes [4].

Figure 2: A snapshot of the user interface of the Molecular Flipbook [Janet Iwasa], available at https://molecularflipbook.org/.

So, molecular animation is making waves for research purposes as well as in traditional education. The Molecular Flipbook and Life on Earth and are the kind of projects we need to be developing to inspire the next generation of students and researchers, and I look forward to future developments to come.